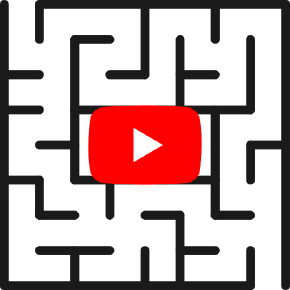 matteo
/
youtube-maze
Fork 0
Code Issues 0 Pull Requests 0 Releases 0 Activity
Explore YouTube mazes in which viewers can make choices between at the end of each video https://youtube-maze.delab.re/
You can not select more than 25 topics Topics must start with a letter or number, can include dashes ('-') and can be up to 35 characters long.
29 Commits
1 Branch
216 KiB
JavaScript 63.3%
CSS 29.5%
HTML 7.2%
Branch: master
master
Branches Tags
${ item.name }
Create branch ${ searchTerm }
from 'master'
${ noResults }

Some YouTube creators have made video-gamebooks during which viewers are invited to make choices that influence the course of the narration. This is generally implemented by breaking up the video into short interlinked segments. This tool automatically generates visual representations of the networks underlying such games.

How Does it Work?

The exploration algorithm automatically downloads metadata about each video from YouTube and then proceeds to a breadth-first search to generate a graph which is laid out using Graphviz. Only the links in the end screens and in the in-video cards are considered for the exploration.

You can also run the server locally, provided you have a working installation of Node.JS and Graphviz.

If everything goes as planned, you should be able to access the server by opening http://localhost:3000 in your browser.

This software is made available under the MIT license. See the full license text →