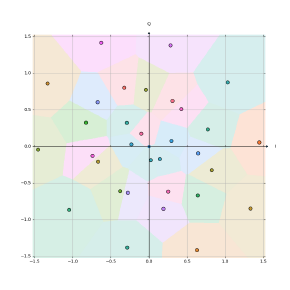 This is the source code for the “Using Autoencoders to Optimize Two-Dimensional Signal Constellations for Fiber Optic Communication Systems” project.

The ConstellationNet model is defined inside the constellation/ folder. At the root are several scripts (described below) for training the model and testing it.

train.py is a script for training a ConstellationNet network. Hyperparameters are defined at the top of that file and can be changed there. After training, the resulting model is saved as output/constellation-order-X.pth, where X is the order of the trained constellation.

experiment.py runs experiments to find the best hyperparameters for each constellation order. Currently, the following parameters are tested:

For a total of 378 different configurations. To enable parallelizing the experimentation, this set of configurations can be partitioned using two arguments, the first one describes the total number of parts to divide the set into and the second one which part number is to be tested.

Results of this experiment are available in results/experiment.csv.